Heavy metal contamination in aquatic environments has become one of the major environmental problems all over the world. Phytoremediation is a plant based technology that utilizes special plants known as hyperaccumulators to purify heavy metal contaminated sites. Hyperaccumulators are capable of absorbing heavy metals in greater concentrations.  Azolla pinnata is an aquatic macrophyte that has been earmarked for its hyperaccumulation ability. This green technology is often more favoured over conventional methods due to its low cost, low environmental impacts and wider public acceptance.

This study was conducted under laboratory conditions to assess the ability of A. pinnata for the removal of Cr, Ni, Cd and Pb through rhizofiltration, which is one of the phytoremediation strategies under laboratory conditions. Under three main experiments, the fern’s phytoremediation ability was investigated. In the first experiment, A. pinnata was exposed to prepared solutions of Cr, Ni and Pb of 2ppm, 4ppm, 6ppm, 8ppm and 10ppm and of Cd solutions of 0.5ppm, 1.0ppm, 1.5ppm, 2.0ppm, 2.5ppm and 3.0ppm respectively. Experiments were carried out separately for Cr, Ni, Cd and Pb concentrations for 7 days. The concentrations of heavy metals used in the experiments largely agreed with the environmentally measured values, although in certain experiments, the initial concentrations exceeded the environmental pollution levels.

The presence of Cr, Ni, Cd and Pb caused a maximum inhibition of A.pinnata growth by 47%, 54%, 52% and 45% respectively while the highest removal percentages of Cr- 98%, Ni- 57%, Cd- 88% and Pb- 86% were recorded in 2ppm, 2ppm, 0.5ppm and 8ppm treatments respectively. The highest Bio Concentration Factor (BCF) for Cr was 1376.67 when treated with 6ppm, 684.95 at 4ppm for Ni, 1120.06 at 0.5ppm for Cd and 1332.53 at 8ppm for Pb respectively. At the end of the experiments toxic symptoms were observed in plats exposed to Cd and Ni. The findings of this experiment revealed that A. pinnata is an excellent candidate for the removal of Pb and Cr even at higher concentrations and for Cd at lower concentrations while it is only partially efficient for Ni removal.

The influence of interactive effects of Cr, Cd, Ni and Pb on their removal capacities of Azolla pinnata and the metal selectivities were determined bythe experiment three. Two treatments were prepared based on the findings of experiment one and two. Treatment I consisted of Cr, Ni, Cd and Pb concentrations that gave the highest BCFs in experiment one where treatment II was based on concentrations of 5% leachate treatment that gave the highest BCFs in experiment two. BCFs obtained from the treatment I were 1023.77, 679.97, 1048.39 and 939.77 for Cr, Ni, Cd and Pb respectively, hence all the BCFs were lower than of experiment one results proving the influence of interactive effects among the heavy metals on the uptake efficiency. In treatment I and II, the removal efficiency of Cr was 81% and 100%, for Ni it was 56% and 93%, 83% and 100% for Cd and for Pb it was 85% and 99%. Thus the metal selectivity of A. pinnata was Pb> Cd> Cr> Ni.

Azolla pinnata can be designated as a good phytoremediation tool for the mitigation of heavy metal pollution due to its high BCFs (over 1000) in relation to Pb (2-10ppm), Cr (2-10ppm) and Cd (0.5-1ppm). However, field studies are warranted to further our claims.

Department of Forestry and Environmental Science 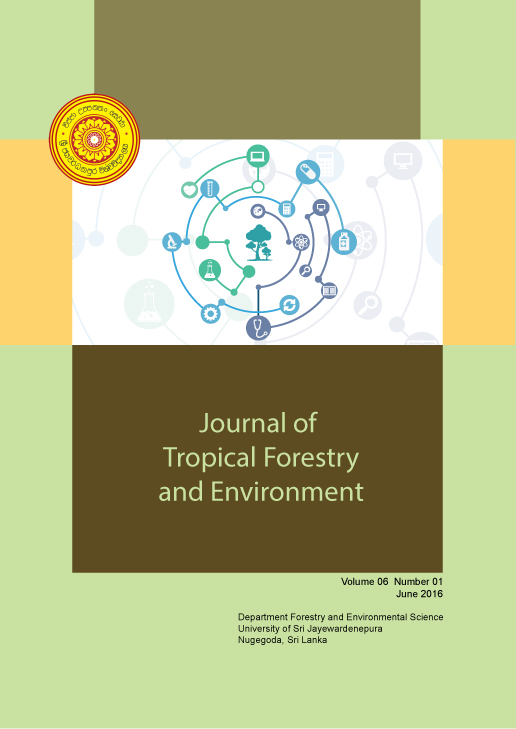 Lenaduwa Lokuge, U. M. (2016). A study on the Phytoremediation Potential of Azolla pinnata under laboratory conditions. Journal of Tropical Forestry and Environment, 6(1). https://doi.org/10.31357/jtfe.v6i1.2626
Download Citation

The publisher retain the copyrights of contents published, and all open access articles are distributed under the terms of the  Creative Commons Attribution-Noncommercial-No Derivative Works 3.0 Unported License[U1], which permits unrestricted use, distribution and reproduction in any medium, provided that the original work is properly cited.

You can download the Legal Code for this License at: http://creativecommons.org/licenses/by-nc-nd/3.0/legalcode